Hello to anyone and everyone who has stopped by.


My bead soup creations are done.


My father-in-law has died.  He was 73 years young.  He was a husband, father, grandfather and friend.  He was a business man, a hard worker and served in the Navy during the Cuban Missile Crisis.  He was very patriotic...flying his American Flag every day.  He was a proud man...he took great pride in his family and his business that his father founded in 1947.  He was meticulous with his trucks and equipment (he had an excavating company), which carried through to his customers and contractors.  He had many business relationships that turned into lifelong friendships.  He was a member and past commander of the local American Legion Post.  He enjoyed hunting, NASCAR racing, riding his Harley motorcycle and having a drink or two of Jack Daniels.  He was a talented machinist.  And he was my father-in-law.  And he was Pap-Pap to my boys.


If you would, please check back.
I will have my pictures up by Monday night.
I hope to see you then.
Thank you.

Good Afternoon to all!  I bit cold here in Northeast Ohio for a late March day!  Even had snow yesterday that caused A LOT of problems (I think the local weatherman was a bit surprised)...I wonder how it is that folks forget how do drive safely when it snows. You would have thought it was the beginning of winter!  Oh well.  All that I know is that it is supposed to be rather chilly all week.  I am so ready for a little warmth.  Please???  Just a little??? 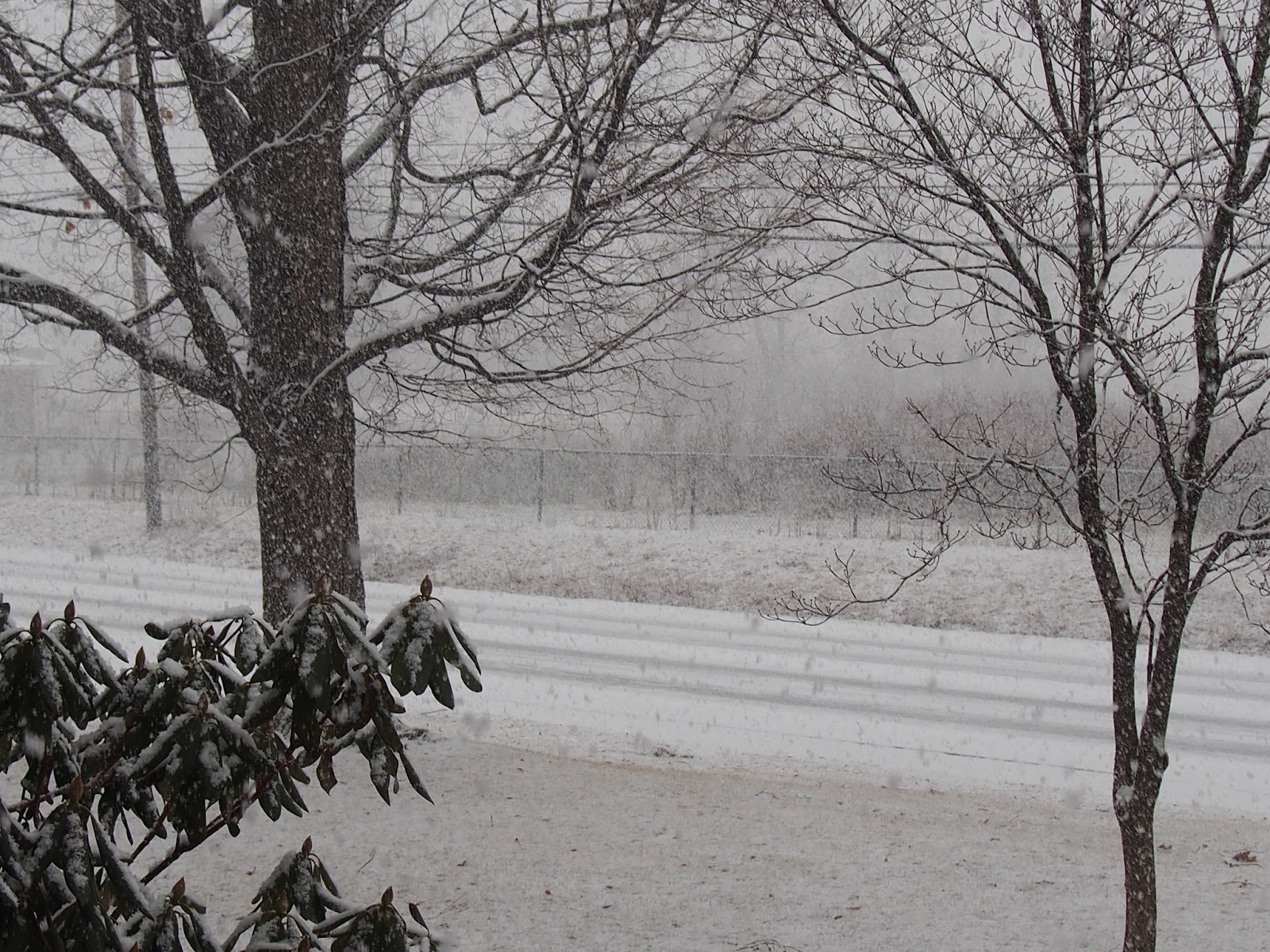 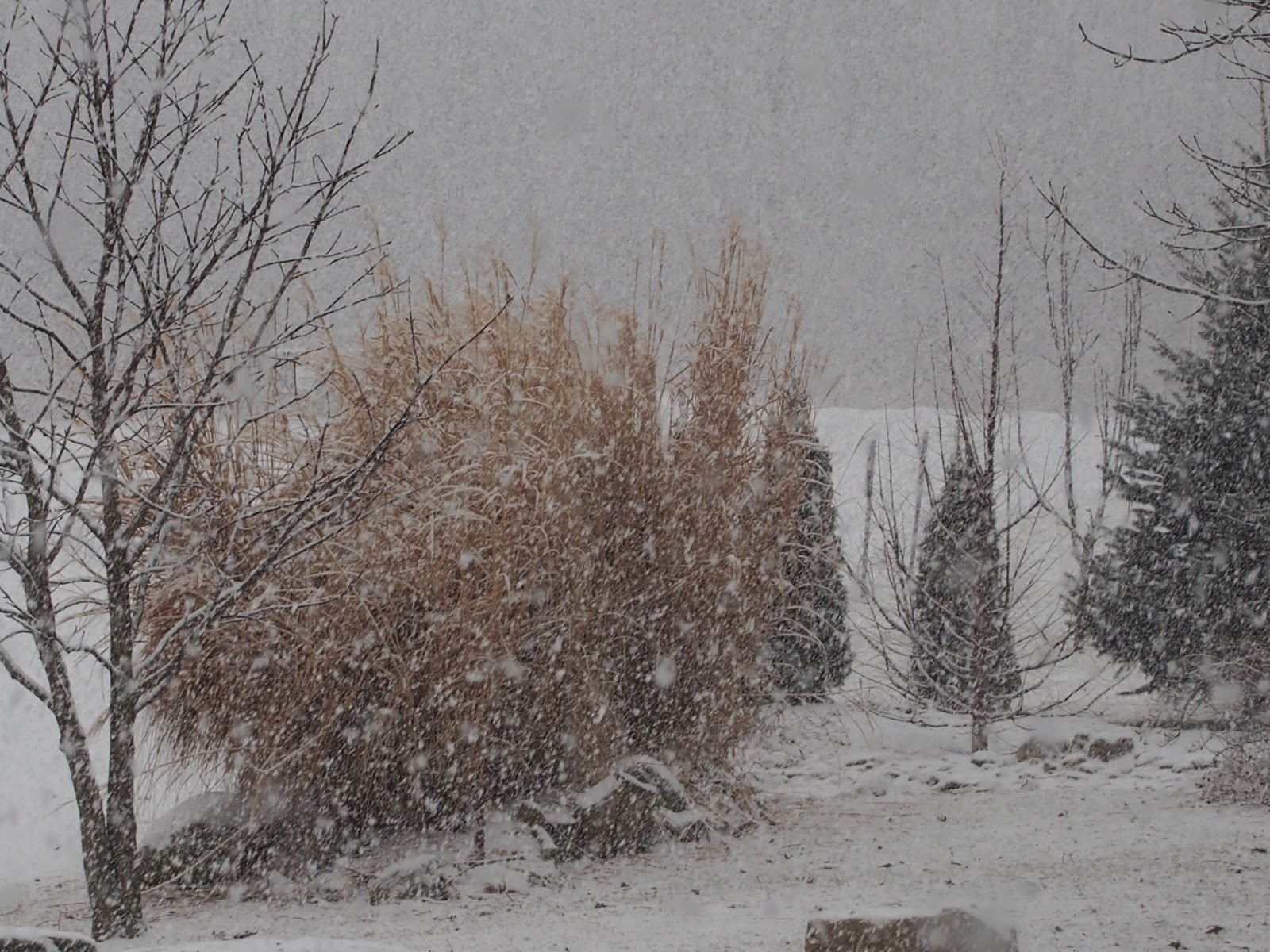 I digress...sorry.
Anywho, my bead soup partner, Christina Hickman, vintagetreasuresjewelry.blogspot.com, finally received her soup ingredients, so now I can post what I sent her.  She received- 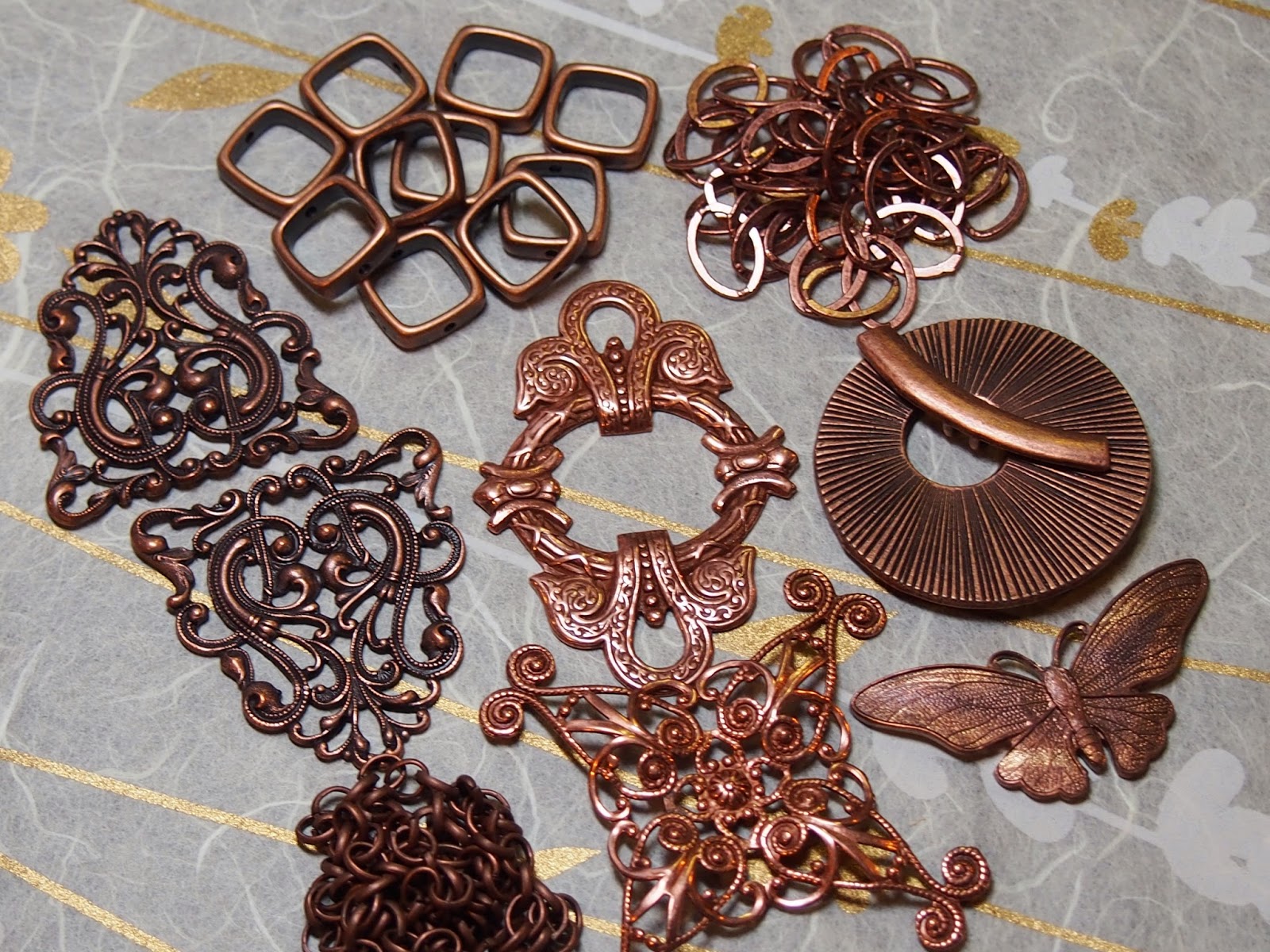 Kazuri ceramic focal, copper toggle clasp, small sunstone rondelles (or beads…could be either!), faceted sunstone nuggets, coppery/orange coin pearls, Czech brown oval matte glass beads, some various strands of seed beads (I know that she can do something with them!) and some brown, shiny dagger beads. There are also copper filigree pieces, copper butterfly, two lengths of copper chain and copper square do-hickies. 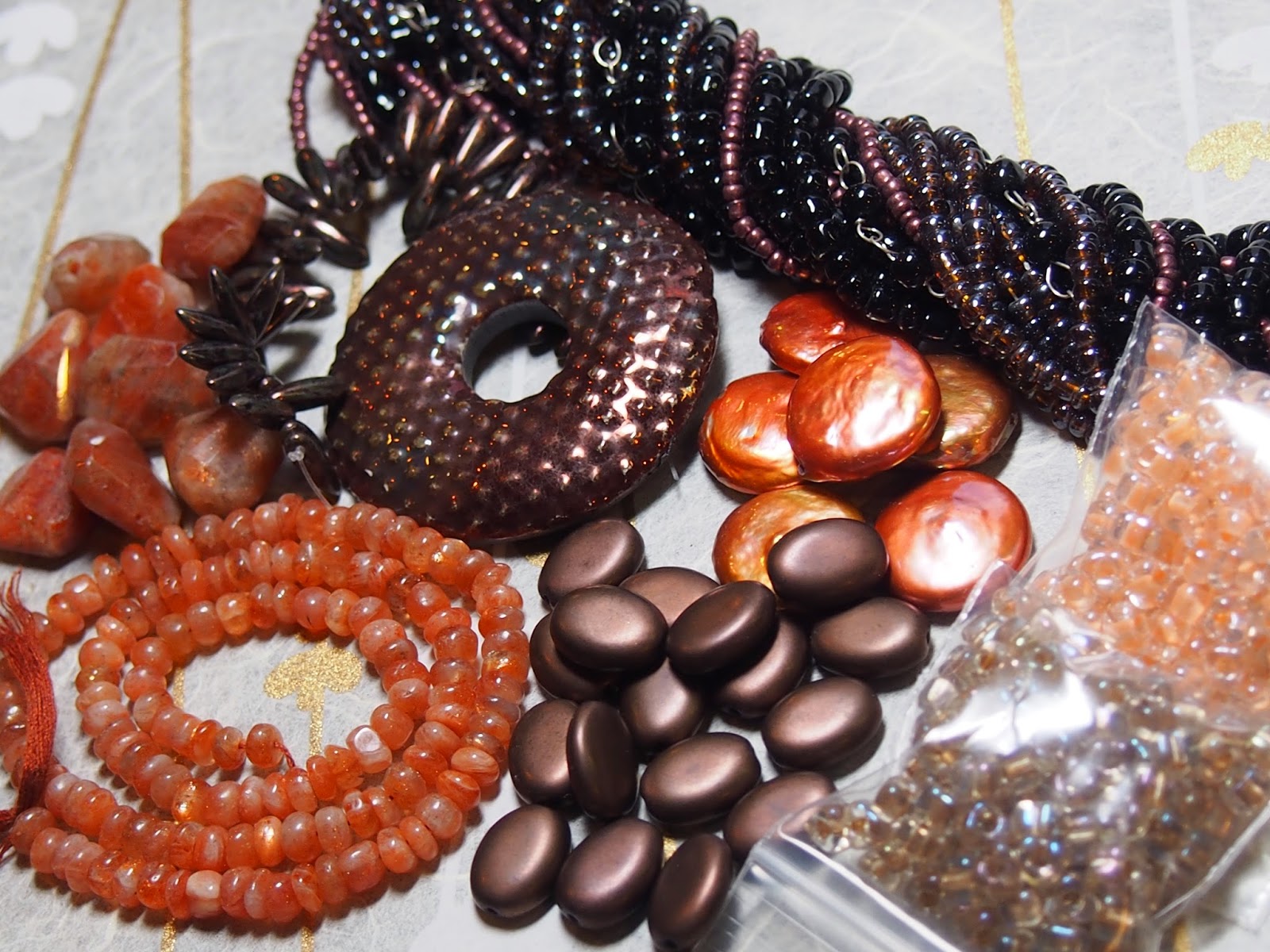 Just for fun I sent her some orphan beads that I made and some random silver findings.  Also, I sent these art deco do-dads.  I think they are supposed to be shoe decor...I am not certain of that.  But, I know that they are older...they are marked 2 cents for each card! 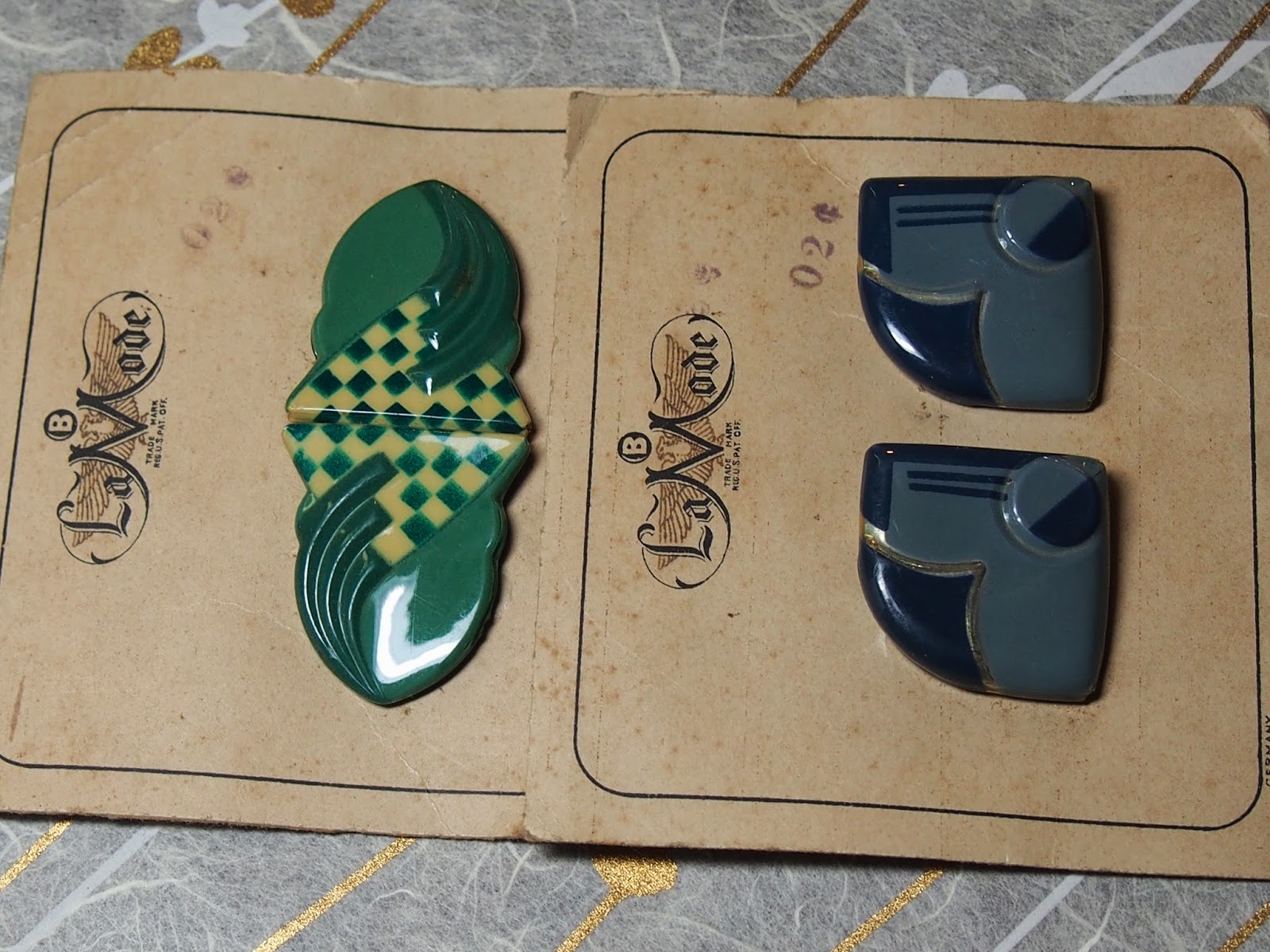 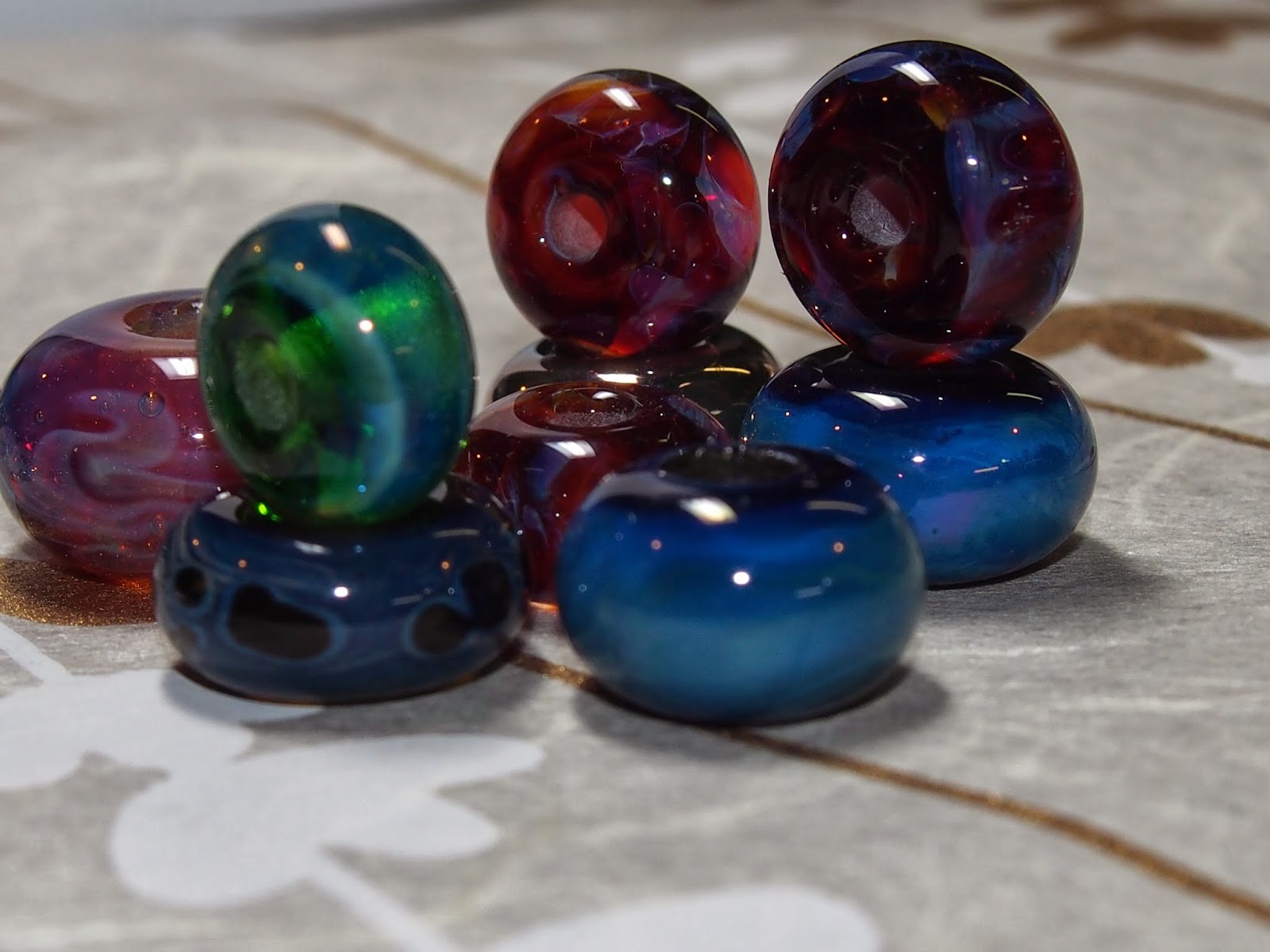 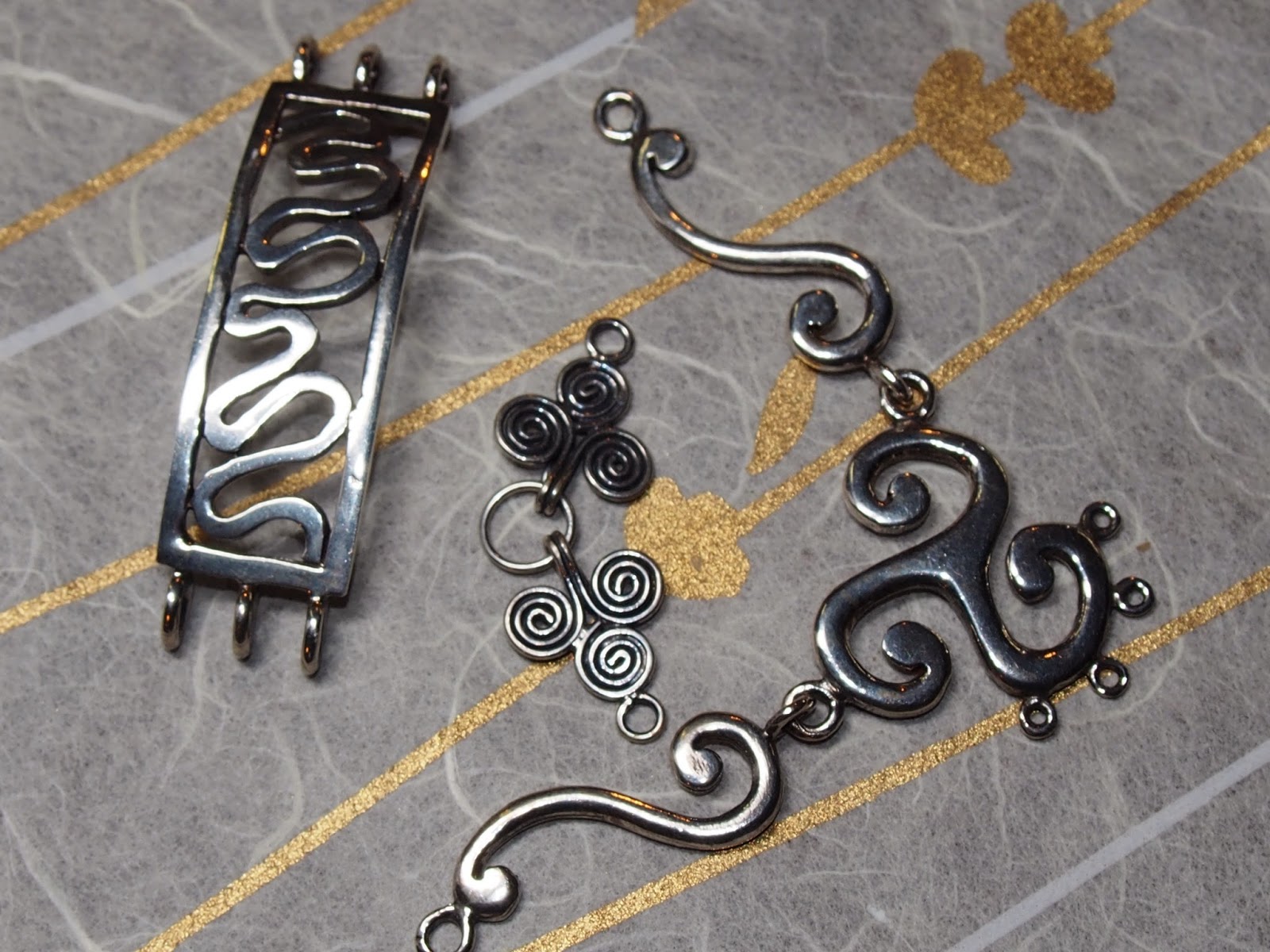 I can't wait to see what Christina makes!  This is so much fun.
Thank you, again, to Lori Anderson for making this possible.
She has her own burdens to bear, but is able to take on such a tremendous task.  Kudos, to Lori and her helpers.

Winner-Winner...Chicken Dinner! OK-not really, but, LOOK AT MY BEAD SOUP!

Bead Soup arrived today!  Yippee!!!  You know, you really don't know what to expect...I have seen some really awesome soups and some that goes the other way...but...I HAVE RECEIVED ONE OF THE REALLY AWESOME SOUPS!  Well, at least I think so!!!  So, I have the box...It's marked fragile and it is from the state of Washington...I know it's the soup. 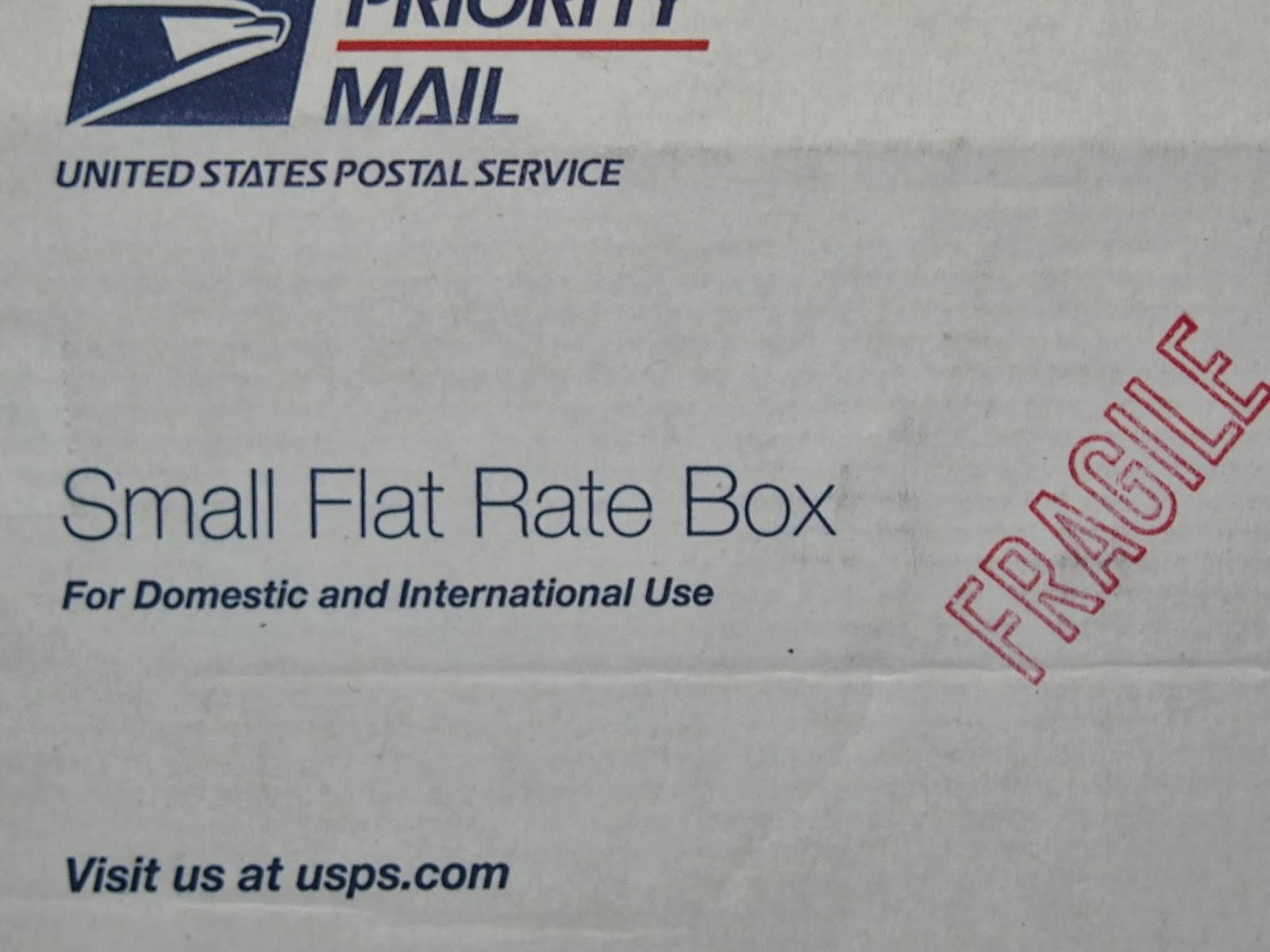 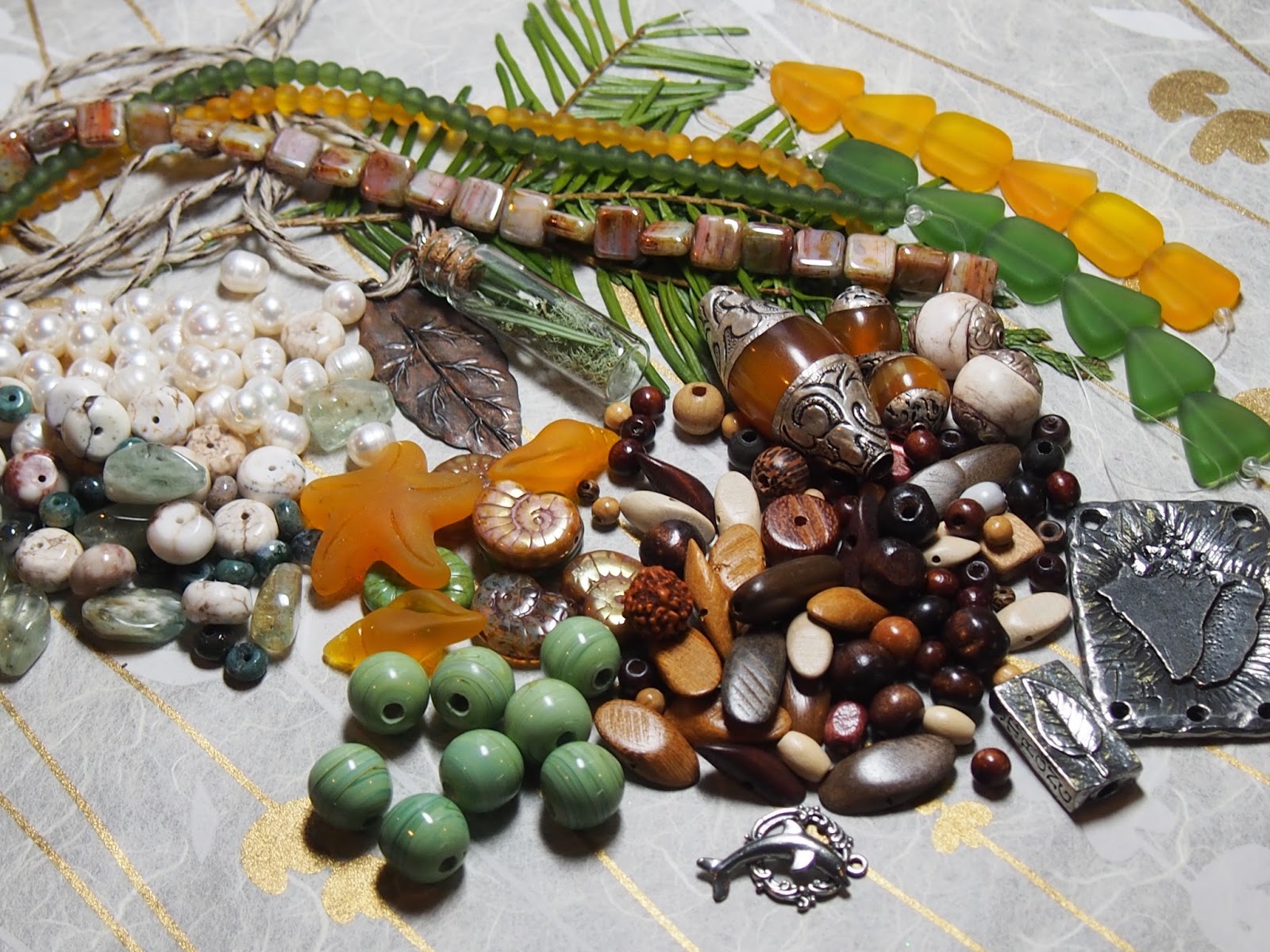 I have to tell you all that Christina is one of the most thoughtful people I have had the pleasure to meet.  We exchanged questions and one of her questions is whether I had a metal allergy.  I even made the comment that it seemed like an odd question.  She sealed the pewter pieces with a clear coat metal sealer so that I would not have any problems.  Can you believe that?  How awesome is that!  It caught me a bit off guard.  Can you tell?

She lives in the beautiful state of Washington.  I have visited that area and it is quite spectacular.  She sent me her version of the Pacific Northwest.  She said that they have the ocean, the sound, and their forests.  I think she covered it!  And what a representation...all the way down to the dolphin toggle clasp.  What a mix...I am truly blessed!

I have to say that the colors are definitely me.  So earthy and natural.  Yay!  After I am through here, I will go run my fingers through them again and get inspired.  (or just play with them!)  Aren't they the coolest?

Peek-A-Boo...can you guess what it is?

Well, here it is...Christina Hickmans' bead soup ingredients.  A yummy blend of tasty morsels to temp any palette.  You can find Christina's blog at vintagetreasuresjewelry.blogspot.com.  I hope that Christina has a hearty appetite!

Posted by Unknown at 4:23 PM No comments:

My Bead Soup partner is...

Hi, y'all...I've been away for a few days.  A really good friend of mine died.  She was like mom to me...giving the advice, a shoulder to cry on, someone to hug when you needed that hug and just an all around wonderful person.  She was a young 73.  That may sound old to some of you, but she was extremely young at heart.  She loved her family and the Lord.  She was not a wealthy person, but was rich beyond words in her faith and her many friends.  She has found peace and I will miss her.  Tremendously.  Rest in peace, Roberta.  I loved you then and now forever.


So, Bead Soup time!  Yay!  I am lucky enough to be paired with the one and only Christina Hickman!  (applause, applause!)  Her blog is vintagetreasuresjewelry.blogspot.com.  You really need to check out her seed bead work...amazing!  The snowy owl piece is to die for!!!  Love it!


We have briefly met (in the virtual world, so to speak) and with my bit of a delay, we will be making soup soon.


So stay tuned...its gonna be a wild ride!


Hugs to all-
Cheryl

I've been playing with FIRE!

It has been a while since I've been at the torch.  I definitely have gotten a bit rusty, but, boy is it fun.  I was playing with some reactive glass but it wasn't reacting like it should...most likely because I need practice.  So, I got some boro out and made some swirly beads.  First, I love boro glass.  I use a mid range torch.  I can make boro beads with this torch, but it takes a while.  I just have to be patient.  The swirlys are easier because I don't have to melt it all together.  I do have to try to keep the coils even, though.  And the color that you get from boro is so vivid and deep and awesome! 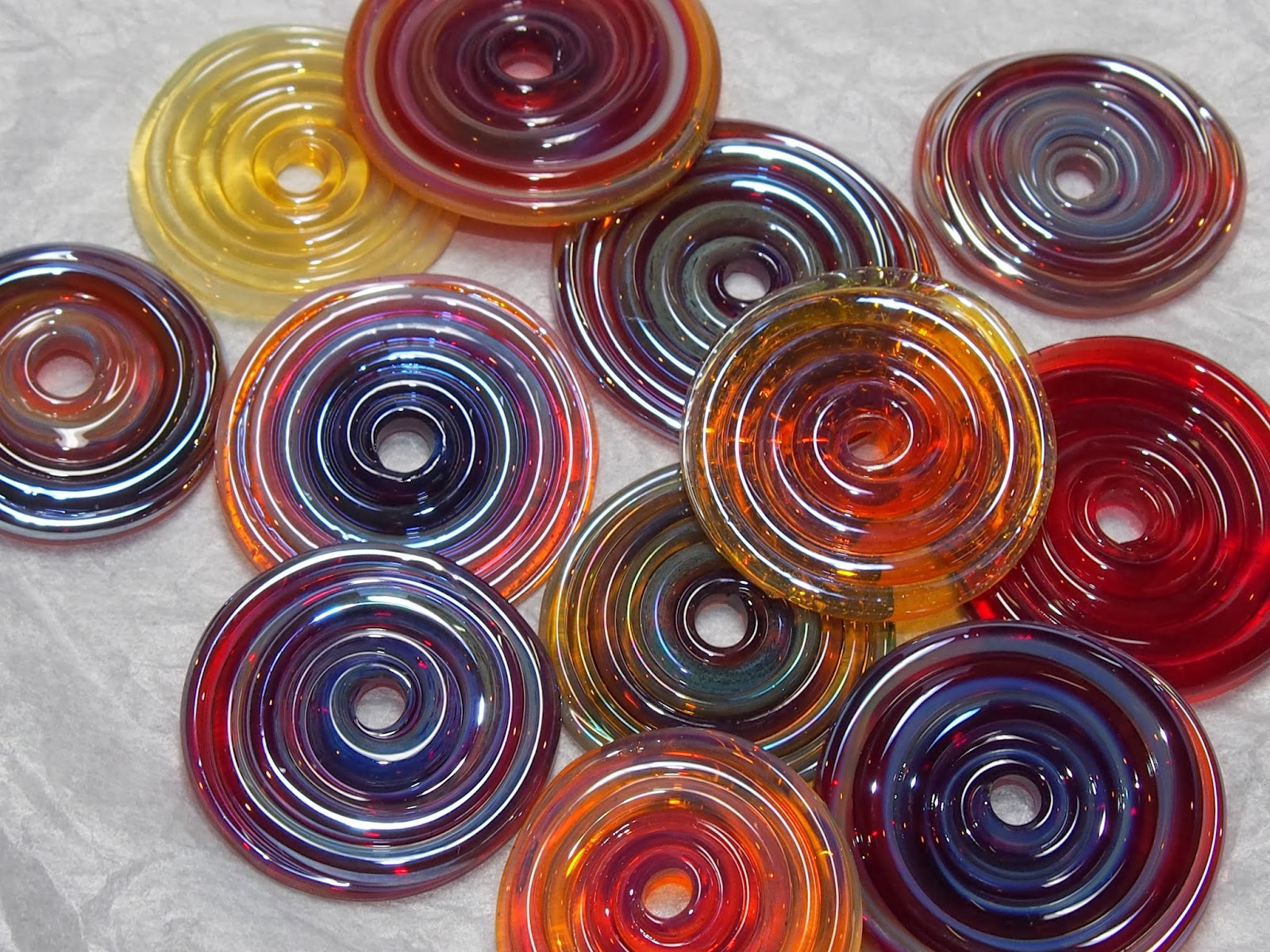 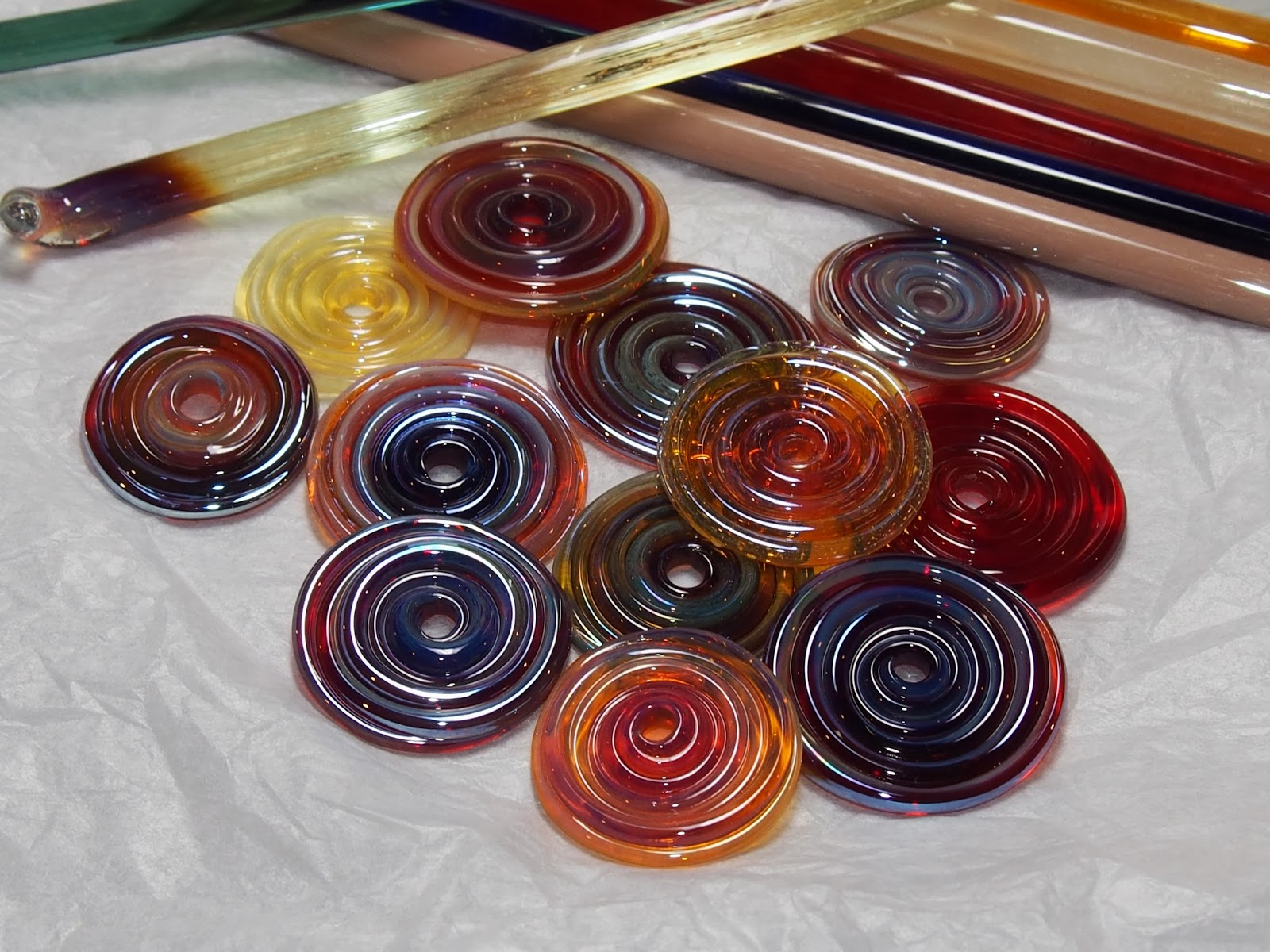 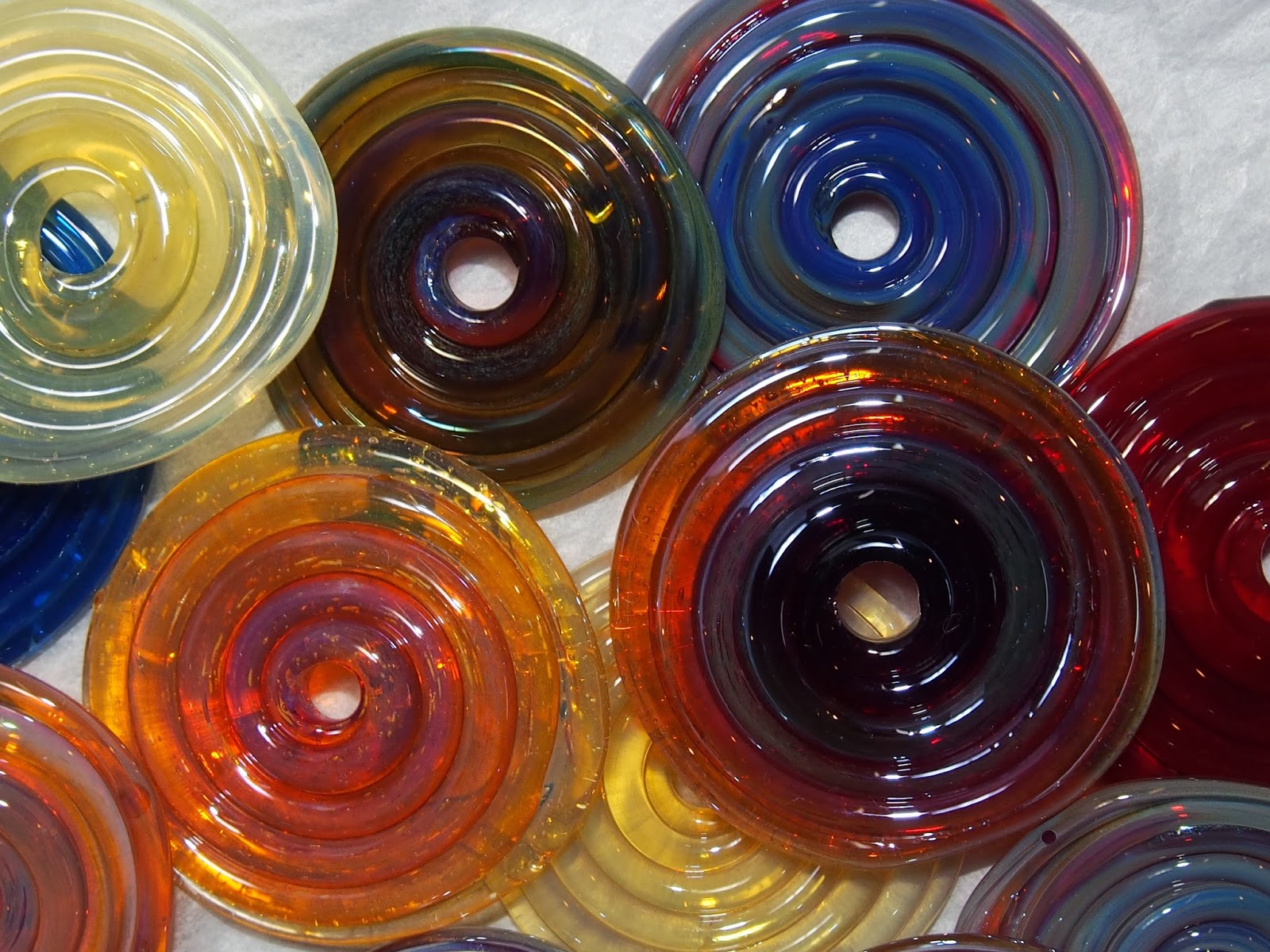 So, have a great evening...
Take care and Hugs to all!

getting back into the swing of things...

Hey all...Just like falling off a bike...you fall off, scrape your knee and get back on.  And so it goes with blogging...its been a while and I'm a bit rusty, but still kicking!


Here we go---late last fall, I made about 125 fused glass pendants.  I signed up for a craft show and just knew that I was going to sell all of them!  Really?  Not.  There were two other people selling fused glass jewelry, eleven others selling various styles of jewelry and a total of 25 crafters participating.  Okey dokey, then.  I have to say, though, it was fun to get out.  But, I only sold 5 pendants.  BOOOOO!  Ya know, I could have found other venues to sell my pendants or I could have put them in a couple of galleries that I know of, but I chose to put them in my backpack and take them with me everywhere I went.  I gave all of them away.  I probably started the first part of November...it was almost a bit awkward for me.  When you approach stranger to give them a gift, they have a tendency to look at you like you're crazy.  At first, I would watch people to see who was doing what, who maybe seemed like they would appreciate a gift.  I had people look at me and say nothing at all, there were a few that told me they would pass on a random act of kindness, some were totally shocked, I received hugs and there were a couple of tears.  I gave them to teenage girls, mothers, older women and there were some men.  I was asked why I was doing this (giving them away) and one person asked me what was wrong with them.  There were a few people who would not accept them and did not even open the box.  (they were all in boxes, so when I handed one to a person, I would just wish them a Merry Christmas).  I couldn't imagine that it would be as hard as it was to give them away.  But I did.  At the drug store, pet store, book shop, mall, beauty shop, coffee shop and deli...and many more.  I learned a lot about human nature and I know that there are many truly nice and pleasant people still out there.  (insert smile!) 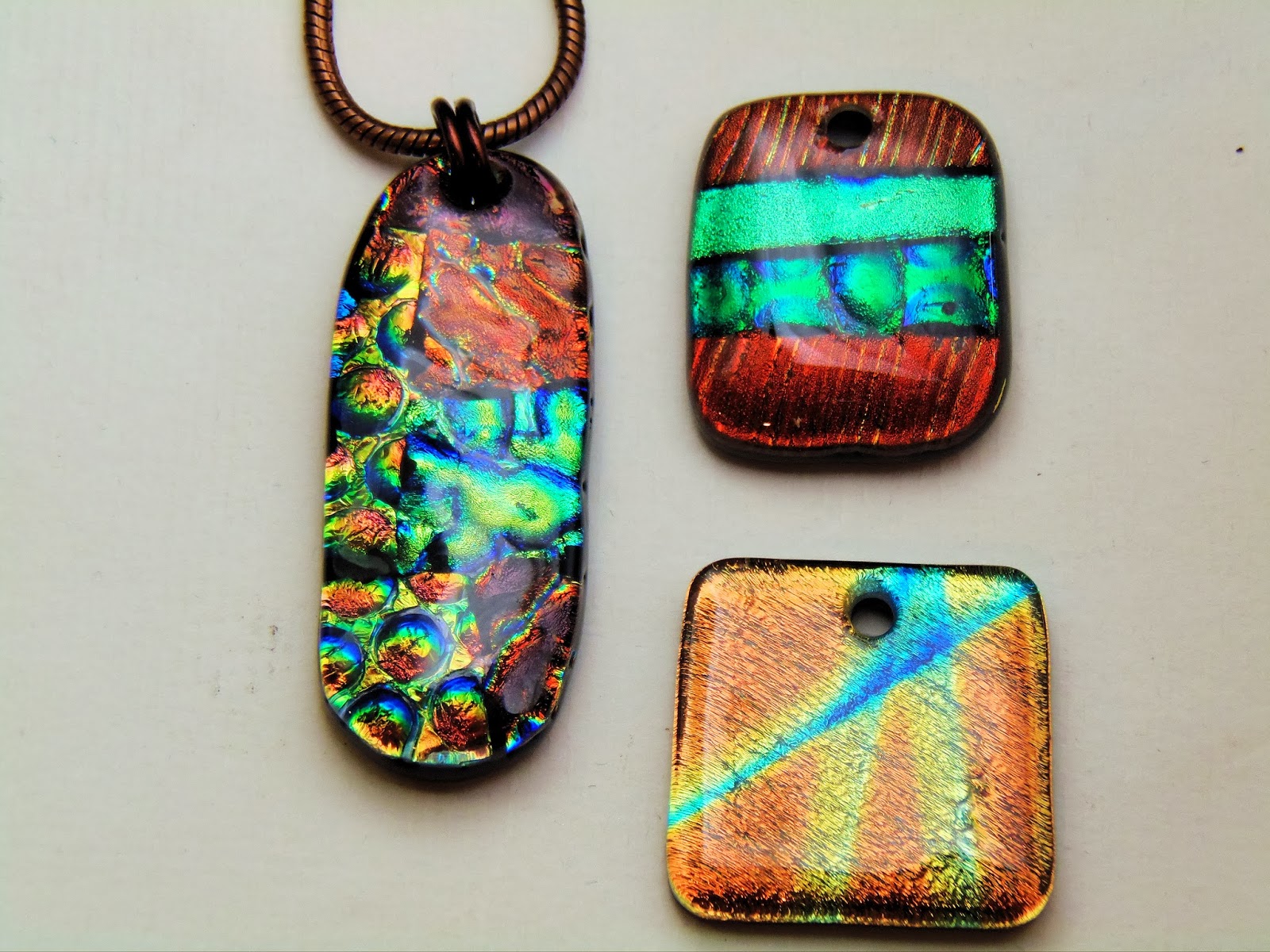 The two on the right are leftovers.  I kept the longer one.  I use dichroic glass when I make the pendants.  It  reflects and transmits colors differently when you change angles.  It's pretty neat!

Here are some other easy peasy memory wire bracelets that I made.  I was focusing more on the color combinations that anything else.  I really like using African trade beads.  They are very organic and earthy. 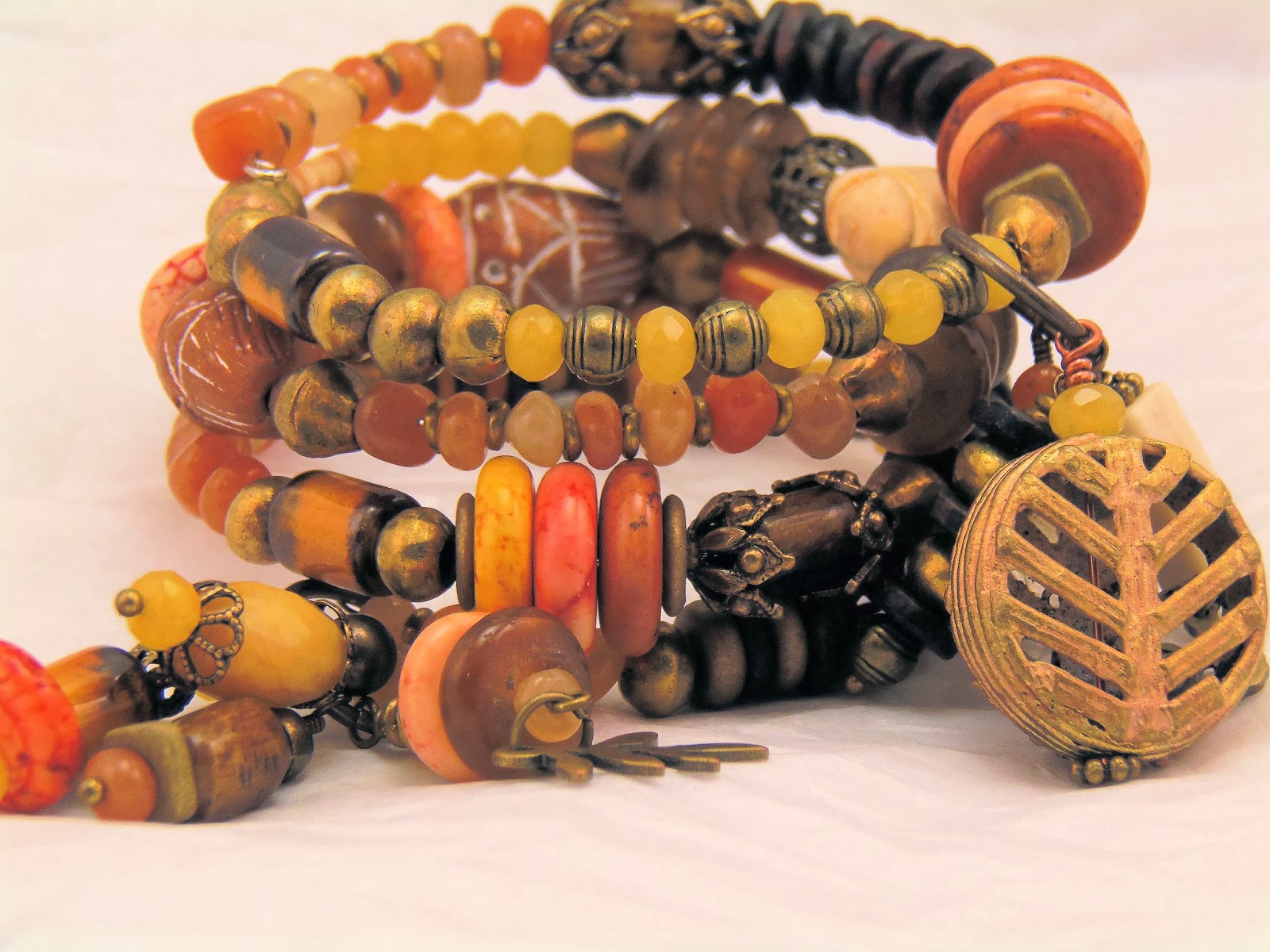 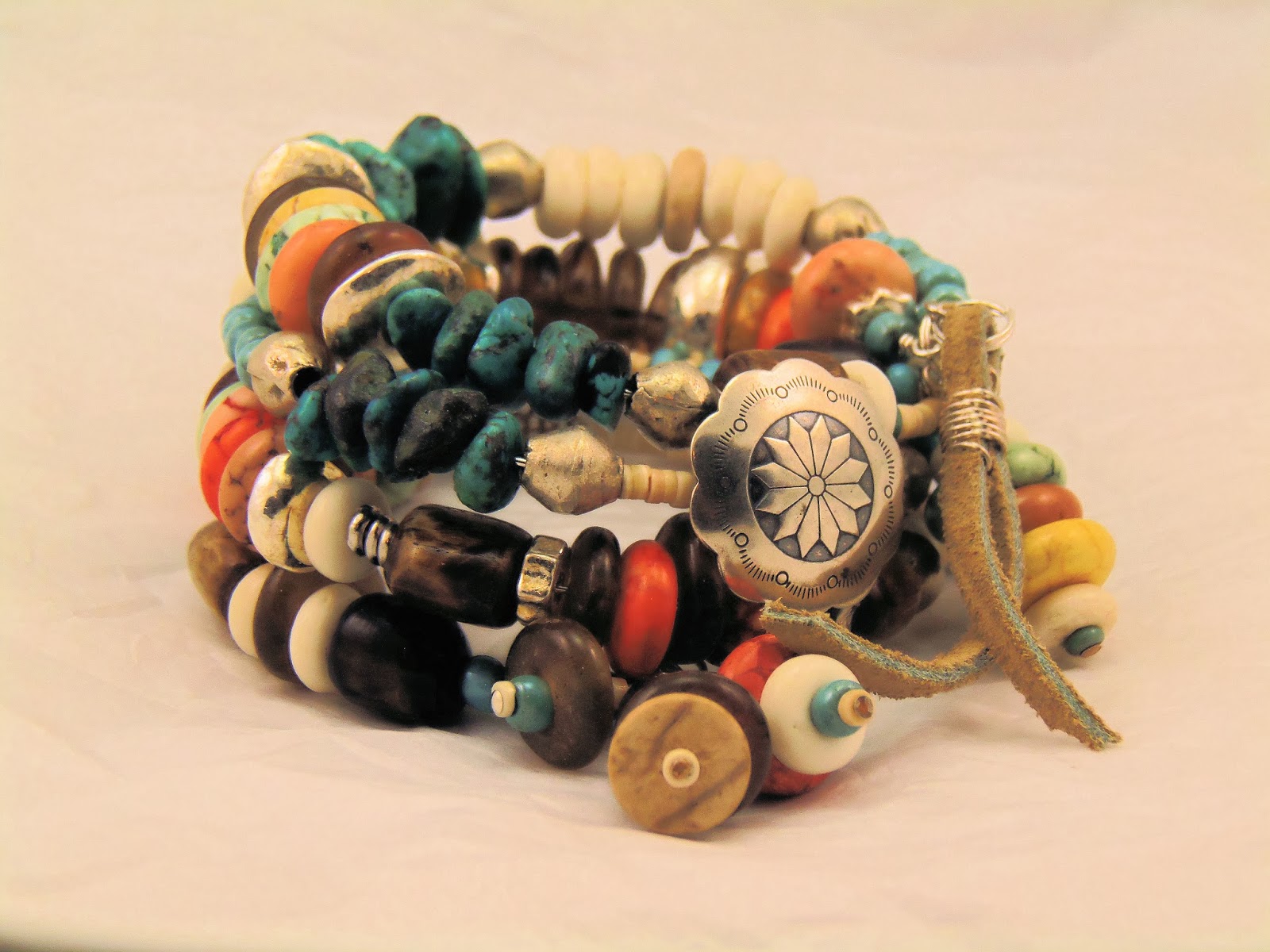 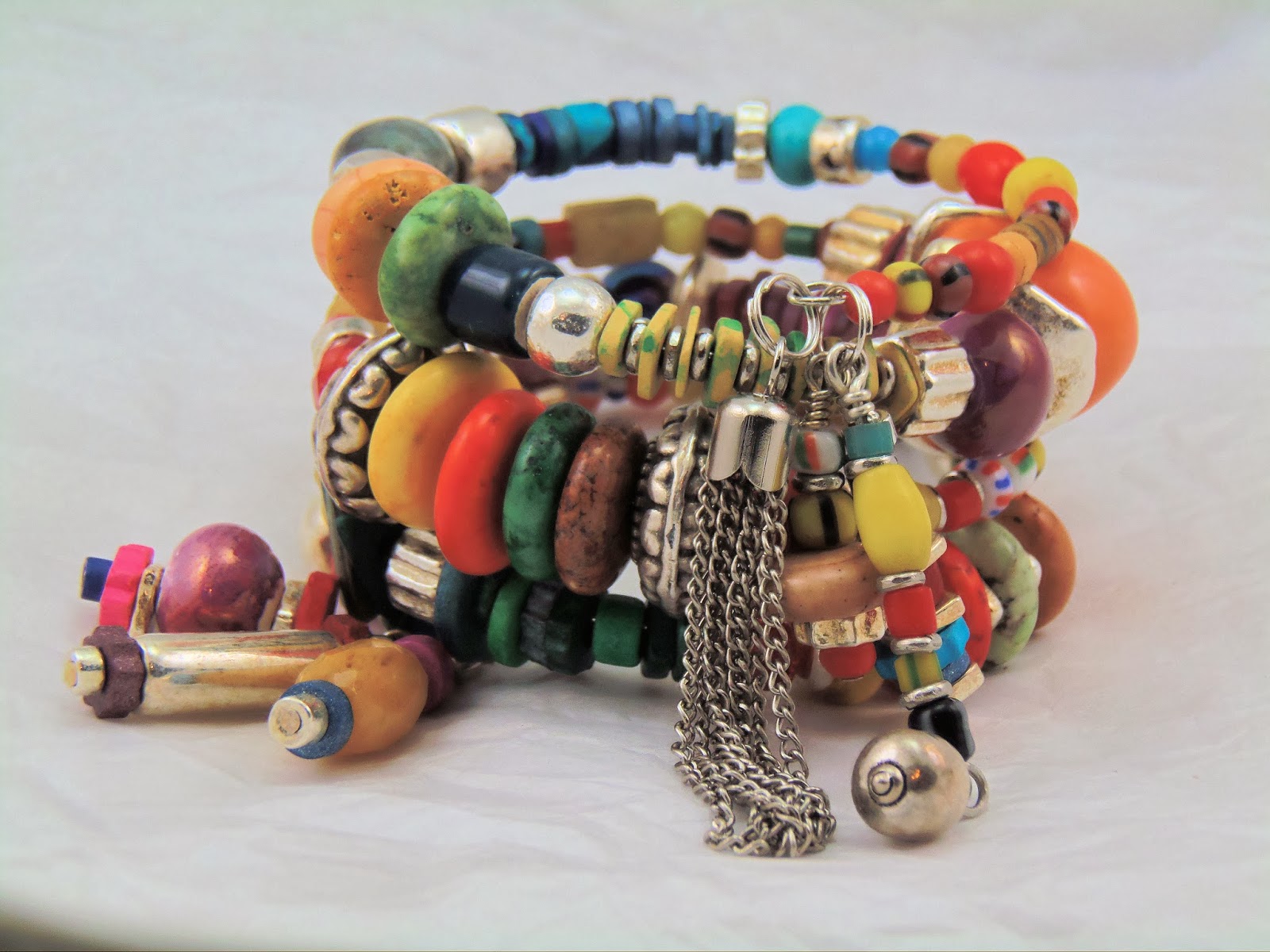 This bracelet took quite a while to make.  I haven't counted how many wrapped dangles are on this...there's a lot!  It is a late (very) Christmas present for a good friend of mine.  I know she will love it.  These are her colors!  ; }  There are Swarovski pearls, freshwater pearls and tourmaline.  I love tourmaline! 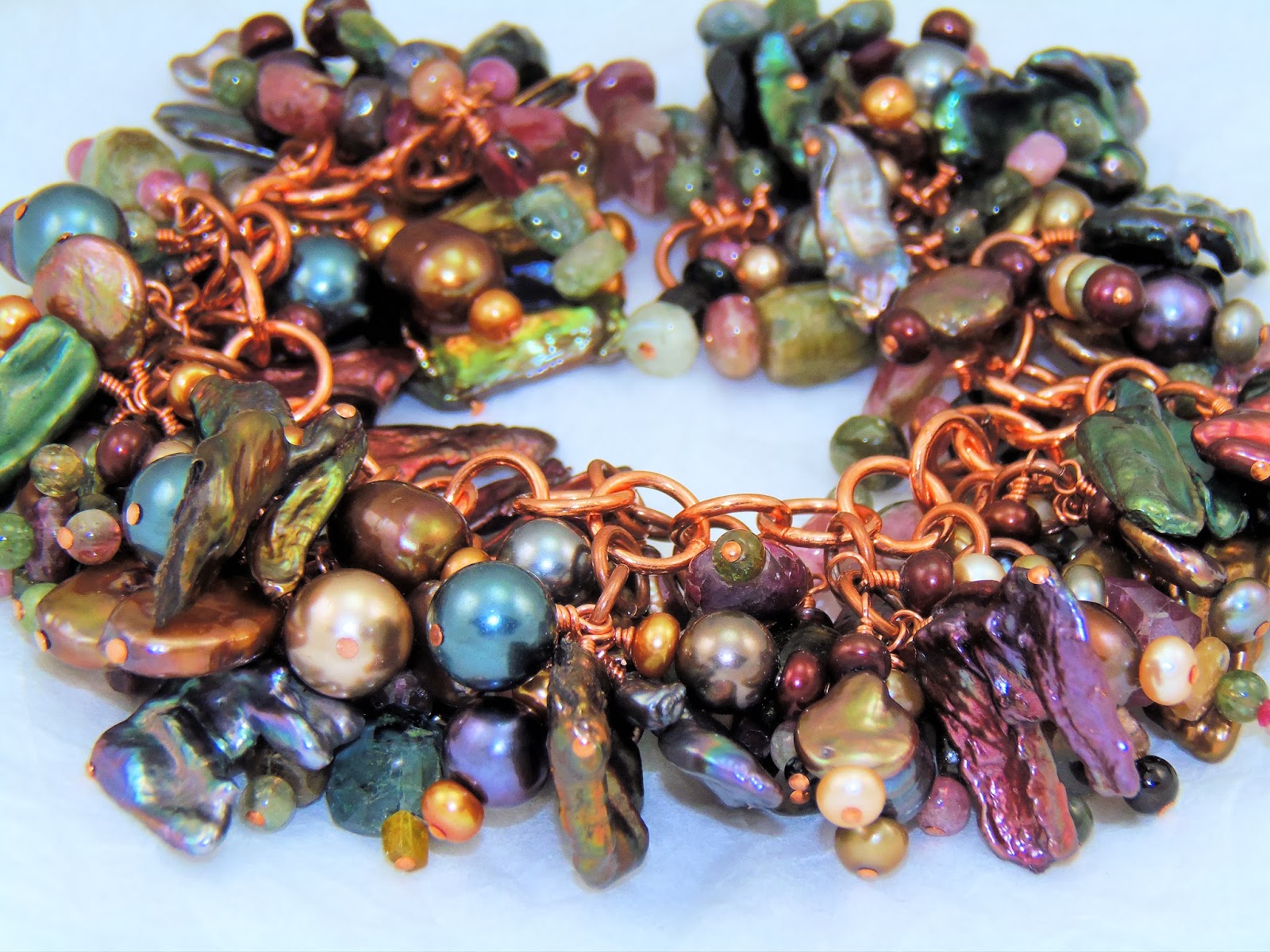 Well, that's all I have right now...I will see y'all later.

Posted by Unknown at 8:47 PM No comments:

The pot is on and starting to simmer...